In 1972 the artist Alan Sekula walked towards workers leaving a secretive aerospace plant in San Diego, photographing as he went, until his actions were stopped by company officials. With this seminal act, Sekula signaled that the military-industrial complex, which existed on the frontiers of his daily life, could still be within the horizon of his artistic inquiry. Some forty years later, the artist Bridget Quinn follows in Sekula’s footsteps. Quinn, however, is not a child of the Cold War, but of a time of accelerating environmental collapse, and her concerns are not directly with the machinations of industry, but with the natural world. More specifically, Quinn is interested in what can be learned from “marginal nature,” that semi-wild world that is hidden in plain sight throughout the developed landscape. And that requires trespassing. As she says of her experience exploring Red Run, a small waterway in her newly adopted hometown of Warren, MI: “I saw an alarming number of “No Trespassing” signs, reminding me that I was not welcome, and that all land is owned. I have never seen a city so concerned with people stepping off of the sidewalk.”

END_OF_DOCUMENT_TOKEN_TO_BE_REPLACED

Entering the former industrial space of 333 Midland’s Annex Gallery, visitors can make out a magenta and turquoise-lighted dance floor peeking from behind a partition of silvery mylar streamers. Within, participants dance together to techno and ghettotech beneath door frames reminiscent of street stoops, and are encouraged to use the video cameras that interdisciplinary artist William Marcellus Armstrong—inspired by Latin America’s democratic, revolutionary, moviemaking movement known as Third Cinema—has provided. Prizes are awarded to the best dancers, all of whom are children. This live-taped event and performance-cum-social practice video is The 48203 Dance Show (2018). END_OF_DOCUMENT_TOKEN_TO_BE_REPLACED

An eight-foot-tall black monolith stands, 2001-like, outside an art museum in San Jose, California. To the naked eye it appears featureless, but when viewed using a phone camera, words magically appear on the screen. As one can imagine, it draws a crowd. It’s a piece from 2006, titled Seen-Fruits of our Labor, that illustrates many of the concerns of artist Osman Khan around that time, foremost among which was the need to look critically at the impact of the increasingly digitally-connected world through art. END_OF_DOCUMENT_TOKEN_TO_BE_REPLACED 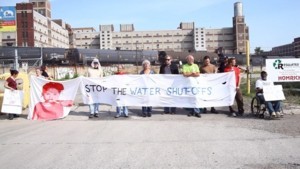 Self-described “media activist” Kate Levy uses her extensive place-based research to explore issues of social justice through video, photography, and artist books. A central concern of Levy’s practice is who does or does not have access to means of representation. Highly conscious of her privileged social, economic, and educational background, she is determined to create working relationships that transcend this – even when it means giving up elements of creative control. For example, the 51 minute film I Do Mind Dying (2017) – covering water affordability and shutoff issues in Detroit from 2014 to 2017 – was developed in collaboration with numerous grassroots and advocacy groups. During the work’s production, Levy distributed cameras to people who lived in neighborhoods with high levels of shutoffs, and the subsequent material was merged with Levy’s own footage in a collective editorial process. The result is an urgent, and multi-layered, work that combines on the ground reporting with revelatory research to create a damning indictment of the web of injustice that envelops many Detroit citizens – recounted in the words of people in the thick of the action. END_OF_DOCUMENT_TOKEN_TO_BE_REPLACED 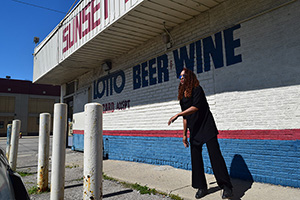 Art, ever sociable, is always in conversation with something else. One of artist Maya Stovall’s primary interlocutors is the City—that ever-shifting concatenation of street, sidewalk, and neighborhood; of people, power, and capital. (This conversation started early; Stovall recalls riding her bike to the Detroit Institute of Arts as a child and developing an “obsession” with the street life she encountered along the way.) For the last four years, she has pursued a related obsession, enacting and documenting an ongoing series of sidewalk performances and ethnographic interviews made near the liquor stores that dot her eastside neighborhood, McDougall-Hunt. Stovall, who trained in classical ballet, holds a Master’s degree in Economics and a PhD in Performance Studies and Cultural Anthropology. She approaches the sprawling yet tightly focused Liquor Store Theatre project as a means to ask what she calls “monumental questions” about human existence via “close, rigorous, devoted, durational looking.”

END_OF_DOCUMENT_TOKEN_TO_BE_REPLACED

There are effectively two periods in the recent history of Detroit art: before and after the publication of “For Sale: The $100 House,” the now infamous 2009 New York Times article that extolled the creative possibilities of minimally priced Detroit real-estate by relating the experiences of Gina Reichert and Mitch Cope, the couple behind art/architecture practice Design 99, and the artist-run, neighborhood-based nonprofit Power House Productions. After the article was published the pair were deluged with interview requests, and with e-mails from artists around the world requesting information on how to move to Detroit and participate. They decided that for a period of two months they would try to answer every media approach they received. At the end of that period their lives were irreversibly changed, and if the truth be told, so was the narrative of Detroit art. END_OF_DOCUMENT_TOKEN_TO_BE_REPLACED 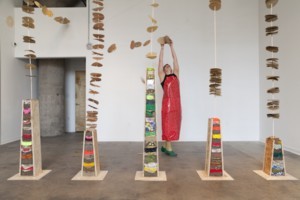 Megan Heeres’s Invasive Paper Project is, in principle, quite simple: participants take vegetable matter from invasive plants, such as Phragmites, Honeysuckle, and Garlic Mustard, and use it to create paper. END_OF_DOCUMENT_TOKEN_TO_BE_REPLACED

On the once blighted northwest border of Hamtramck stands a well-lit building with a geometric pattern painted on its facade. This is Popps Packing. Graem Whyte and his wife, artist Faina Lerman, built Popps together. There is art in this building, and arguably Popps itself is an artistic undertaking. Since 2009, Whyte and Lerman have invested themselves in programming gallery events. They’ve built a sculpture garden and created a residency program, and they continue to activate their section of town by facilitating the work of artists from Detroit and overseas. This is about community. This is where Graem Whyte’s work is rooted. END_OF_DOCUMENT_TOKEN_TO_BE_REPLACED 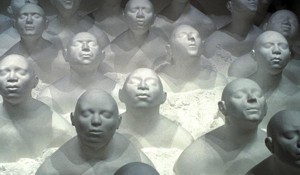 Chido Johnson grew up knowing the meaning of struggle. His Methodist missionary parents were deeply committed to the Zimbabwean independence movement, and one of his early memories is of the family being deported for his father’s political cartoons. END_OF_DOCUMENT_TOKEN_TO_BE_REPLACED