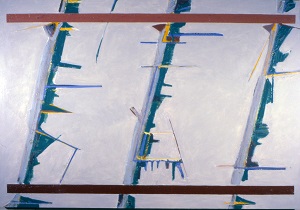 What is an artist’s practice but a universe unto itself? A total environment, with the artist at the center, in which a vast but finite set of ingredients—think experiences, materials, impulses, and predilections—cohere, by means both mysterious and prosaic, into related forms that evolve over time. It’s an apt metaphor for the work of Gary Eleinko, a lifelong Detroiter who came of age as a painter during the bricolage days of the Cass Corridor movement (where any cast off thing could become art) and who remarks with frank wonder that, “Everything in the world is made up of 98 natural elements. There’s nothing else. 98 ingredients make up everything we know.”

Scientific knowledge is one of the many distinct elements that come together to form Eleinko’s ever-evolving universe. Others include a fascination with the natural world (particularly plant life and natural disasters), a tendency toward certain shapes (bars, lines, Xes and triangles proliferate), and a consummate craftsman’s concern with construction and form. In an age of increasing interdisciplinary promiscuity, Eleinko is a monogamous maker. He labors daily in the full-to-brimming Corktown studio he has occupied since 1988 over canvas, paper, wood, and found objects—arranging, considering, painting, and building. As a painter, he is part of an influential movement of artists who reconceived the painting in sculptural terms, as a constructed object—who remembered, for instance, that canvas is a malleable material, confined to the familiar shapes of square and rectangle only by stretcher bars and convention.

To break the rules, though, you have to first learn them, and Eleinko started his career conventionally enough, painting flowers on regular rectangular canvases. His accomplished early work, inspired by Georgia O’Keeffe, revels in sensitive, close-up botanical studies like White Lily #2 (1973) that are rendered in soft, absorbing textures and subtly graded hues.

These were followed by a series of abstract works, a shift that Eleinko says was expedited when he purchased two albums by the up and coming avant garde composer Philip Glass, whose early experiments in music as perpetual motion machine made a profound impression. Contrary Motions (1978-79) was Eleinko’s first translation of Glass’s vocabulary to his own language of abstract painting, and heralded a new body of post-minimalist works on paper and canvas that are dominated by strong horizontal bars and intersecting diagonal lines, but imbued by the artist’s fine, painterly gestures: a world of shifting subjectivity within an objective, geometric framework.

The idea of enclosure, of the tension between what is held within and hidden from without, became a dominant theme in Eleinko’s dimensional paintings of the 1980s. In the late ’70s, reviewing a collection of his work as installed in a gallery at the Fisher Building, he says he began to imagine all the bars and lines coming out from the paintings’ surfaces, taking up actual space, and so went to work on combines like Detroit 2 (1979-80), which is executed on canvas but which includes wood, cardboard, and rope affixed to its flat surface. The entirely dimensional work that followed, typified by pieces like Held Fast (1985-1986), in which Eleinko manipulated and combined painted canvas, rope, and sundry other materials in ways that emphasized restraint, binding, and wrapping, have a distinctly pent-up affect; they’re abstract formal experiments with vaguely unsettling pyschosexual implications, summed up by a friend of the artist’s who referred to this body of work as “organic bondage.”

The organic component is a significant one; the natural world has remained a recurrent touchstone for Eleinko even as his modes and methods have shifted over time. In the ’90s, for instance, he created simple, meditative shaped canvases like Autumn (1995) that were inspired by the seasons. Later, he made Waterfall (2005), a showstopping assemblage of painted hose fragments that cascades six and a half feet from top to bottom, as well as Desert Fault (2008-9), a lively dimensional painting inspired by tectonic stress.

Whereas Eleinko’s oeuvre from the ’70s through the ’90s can be formally divided with relative neatness into distinct periods, this recent work defies such categorization. These days, he says, he’s making what he wants to make, and allowing himself to follow tangents and atypical impulses. The resulting work includes a series of small constructions inspired by each of those 98 elements, as well as compelling dimensional one-offs like Two Souls (2009), inspired by the scarring effects of his Catholic upbringing, Curvy Composition (2011), a compact homage to Russian Constructivism, and As the World Turns (2015), a sunset painting that successfully sheds the trappings of kitsch (even as its title winks at the challenge). Eleinko’s forms, in other words, have come unbound—and look, the universe is expanding.