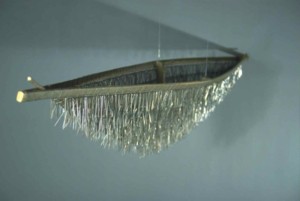 Christine Hagedorn’s hands are impressively large, the skin cracked and calloused in places; a worker’s hands, which belie the slender, elegant lines of her overall stature. A similar duality runs through her practice as an artist. Her fine sense of order and aesthetics temper her essential impulse to let materials speak for her, by means of letting them speak for themselves, through her immersion in rigorous, sometimes obsessive handwork. But a third motive breaks between these channels in her art-making. Hagedorn recalls her childhood habit of finding something–a necklace, a shell, a stone–unearthing it from the ground, and wrapping it with string or yarn, then hiding it again, in order to recover it later and deem it “powerful” or “magic”. This engagement with other-worldliness through self-made ritual circulates through all her creative work.

Her early work reflects the influence of a transformative exposure to African art and ritual, particularly the practice of pounding nails into ancestral images to represent prayers and promises of sacrifice as a means of personal and communal healing. The starkly expressive, Prayers for the City (1994) is an old burned, weather-beaten board she scavenged off the street and hammered with a fringe of rusted nails along its singed edge. Similar works, using a wooden pole or fence post, begin to allude more literally to the human figure and by implication, the self. One of these, Coming Through the Fire(1995), she wrapped with wire to a bier of wire mesh and set on fire behind the old Michigan Gallery in a cleansing ritual that invited viewers to throw their own tokens into the flames.

This performance also marked a transition in her work away from the flat, vertical wall pieces which retained the 2-d influence of her background in printmaking. Packing her figure pieces horizontally for transport one day, she suddenly saw them take on the form of a boat in motion, and realized that this form was an even more apt vessel to express the ambiguous interior/exterior nature of the self. Many of the boats in her subsequent work allude to paradoxical aspects of identity–fear and desire–conveying a sense of protection and survival as well as vulnerability and self-destruction. The first in the series, Spirit Boat (1996), is simply a bundle of reed-like grasses, held in its center by a single rib and bound on either end into a log bowing arc, appearing light enough to float, but completely open and penetrable by air and water. Another seminal work in the series is Psychology of Desire (1996), a vessel wrought of scavenged, heavy-gauge, twisted wire, studded with rusted nails, in a posture of menace bound with a sense of tragic destiny. A stunning example of her obsessive hand work is Implication (2000), its outer surface threaded entirely with sewing needles, hanging like rain through the screen of its armature, the thread-ends left to carpet the inside like the soft fur of an animal.

Eventually, script and text begin to mark the surface of Hagedorn’s work, propelling it into another dimension of reference. She intentionally obscures interpretation by cutting up and jumbling alphabets, numbers, signs and narrative, using this practice as a way to represent a sense of exile and alienation from lost systems of language and meaning. In Alternative Communication (2007), old sales tags she stamped with signs and symbols, hang along a boat’s contours in dense and illegible sequences.

This reference to irretrievable human knowledge finds its fuller expression when Hagedorn shifts from the boat form to the sphere or globe, as representations of the self move from the individual to her context in human history and culture. Impossible Books (2003) condenses three years of her journals, hand-written on suaro paper, which she copied, inverted, and sliced into strips, then built up in layers to cover the surfaces of a series of spheres and hemispheres, some severed and opening into actual pages, with an inscrutable geology. Through the ritual practice of her art, in these “spheres of hidden knowledge,” Hagedorn manages to universalize her lifelong desire to touch and hold the numinous power which is lost, forgotten, and collectively yearned for by our unmoored culture, yet still hidden inside the world.