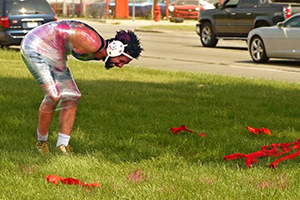 The artist Billy Mark intentionally messes with your head. He moves, he morphs, he mystifies. Watch him for even a moment, and it’s soon clear that he embodies this trio of M’s and more—sometimes all at once.

In fact, Mark means to make you believe that the whole “artist” moniker—improvisational freestyle poet and installation artist, to be exact—is too confining for him or his multidimensional work, which spans and connects conceptual theater, performance, sculpture, poetry, music, movement, even silence. Label him, if you must, but no longer will he narrow himself.

“I’ve had this revelation,’’ he said during a visit to the North End two-family flat that doubles as his work and living space. (Mark lives with his wife, fiber artist Sarah Perry Mark, and their two young sons.)

“After 17 years of saying to people, at my core, I’m an improvisational poet and then watching eyes glaze over, I’m letting it go.’’ Never mind that the very label Mark is releasing was the hook that earned him a coveted Kresge Arts in Detroit Fellowship (2015) and a visiting artist stint at the Cranbrook Academy of Art.

Mark sounds part mystic as he describes his journey away from defining himself and his work. “I found myself in a deep struggle trying to shape myself. I thought, ‘Maybe you better identify yourself before somebody else identifies you.’ I’ve felt this need to try to have some control over my own creativity so that maybe I’d be remembered long after I’m dead. But that’s where the work gets lost, in the need to control. The naming of a thing sometimes blinds you, instead of letting the experience become an opening.’’

Opening: The dictionary describes it as a beginning.

In Mark’s lexicon it’s a synonym for Detroit and a stark antonym for Los Angeles, the city where a Cal Arts degree was supposed to help him make his creative mark. “After going to art school I started to get all of these ideas from all of these different arts movements throughout history, trying to figure out how they applied to the work I do; I felt more encumbered than anything,’’ he explained. “So much time was spent trying to find a tagline for my entire art-making soul, because in L.A. you’re always only one or two degrees away from someone who can get your face out to a million people.”

He continues: “I lost myself in the conversation of what art is supposed to be, rather than creating.’’

In the Bible, a book that Mark looks to for both its lyrical beauty and life application, to be lost is eventually to be found. This is the tale Mark tells to himself and to curious observers to make meaning of what’s happened to his art-making since being led to a place where struggle itself is art.

“Nobody is going to make your career in a moment here,’’ he said. “ For me the lack of that possibility or even having a well-established creative infrastructure to look to, gave me a reason to reexamine why I even make work in the first place. It’s been a frightening and wonderful experience, to really look at who I am instead of how I fit into the latest art trend.’’

Truth be told, Mark fits no more in Detroit than he did in L.A. But here, he says, he’s learning to allow his difference to multiply his curiosity.

This is how Mark wound up, in 2016, in the middle of a grassy median on 8 Mile clad in a wresting singlet and eventually completely wrapped in cellophane. Wrestle was his live response to Detroit’s stinging racial divides. Mark cast the infamous city/suburb dividing line as his stage and evil opponent. His body became the metaphor of what he likened to a spiritual battle for Detroit’s heart and soul. Mark often uses his body as metaphor. For Primal Flash (2017), a traveling Live Coal Gallery exhibit, he and renowned jazz bassist Marion Hayden collaborated to interpret the sounds of a series of vibrant handmade African hunting jackets. Mark’s wife and painter Saffell Gardner, who is married to Hayden, designed each of the pieces. By fusing piercing rhythms and jagged movements, Hayden and Mark made the jackets speak, creating narrative where there was none.

Moments like Wrestle and Primal Flash now form exclamation points on Mark’s vow never to leave Detroit. “I’m making work that I don’t have to define or limit or shape in order to please people. I can embrace parts of myself out of sheer curiosity. That’s a freedom and it feels more real here than in any city I’ve ever lived in.’’