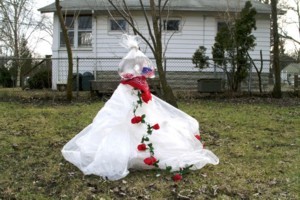 It is a foundational concern of Shanna Merola’s that all of her work be firmly embedded in its historical context. Observance and urgent communication of moments of injustice are the center of her personal, professional, and artistic life. In light of this, an overview of her many bodies of work, while intimidating in its breadth, quickly falls into a sensible pattern. There is a vast, triangular power brewing here — of form, composition, and context — that jacks out of every image, a seething social urgency. For example, “Black Day in July,” is a series of collage/assemblages that were installed and documented at various sites in Detroit’s 12th and Clairmount neighborhood, and address the 1967 riots and their aftermath in that community. The sample shown might shock the viewer with its palette (a cluster of lurid pinks like those of Philip Guston, one of her favorite painters) and its formal cascade of imagery shooting across a pocked, stained pink wall like projectile vomit, and yet it keeps one interested, and becomes more subtle and formally fine the longer one looks. The work is baldly political in its use of traditional revolutionary imagery– pig masks and collage looming over documentary-style photographs of soldiers moving in jeeps across a grim landscape. The pig is the totem animal in this piece. Glancing over it, one is interrogated by pig eyes darting out from collage and empty masks. The distinction between the gaze of the pigs and that of the soldiers becomes hazy, though they certainly share the right to look back at the viewer. The assemblage is installed on a wall in an abandoned house next to a gutted light switch in a simple, but potent, second nod to the power of the Pig, be it spirit animal or National Guardsman.

This impression continues as more of Merola’s work comes into view. In “Another Country,” tacky, sinister still lifes rise out of humble backyards and fetid swamps in the style of home-made memorials and symbolic markers. The triangular, tent-like forms festooned with American flags, shoes and containers of liquid again evoke Philip Guston, this time in composition and iconography, as well as in tone– the low simmer of tension that weaves through both artists’ work comes in part, perhaps, from the collapse of values into lurid, parallel bands of color the viewer must sift through. One often encounters this phenomena in documentary photography, due to the lack of orchestrated composition. Merola creates a similar “real world” effect in her fine art photography by taking the colors we notice and admire in passing, and making them central. One feels the earnestness behind it. The concerns Merola chooses to highlight in her work– police brutality, corruption in local government, and, more recently, Detroit’s rash of water shut-offs, are those she feels to the depths of her bones. In order to make good, politically and socially engaged work, one’s commitment to one’s causes can’t be light.

Merola walks the walk. Her political drive has led her to participate in, as well as photograph, actions of the Grace Lee Boggs Center and the Detroit Coalition against Police Brutality. Her documentary and studio practice share a focus on images of abuse of power and resources with the aim of ending all such violence, unequivocally- she credits her time with the Boggs Center for instilling that focus. She also works as a Legal Observer for the national Lawyer’s Guild, where her job is literally to bear witness to events that have the potential to erupt into brutality between powerful entities and the individuals who confront them. The apparent rapid-fire compositional style in her work masks a canny formal power that whispers of deep loss and humble beauty in a dialog parallel to its more ascendant political voice.

Her touch courses through the actions of Detroit Homeland Security, a collective consisting of herself, Kate Levy and Bryce Detroit. The group stages performances and assembles sound pieces, as well as dropping guerrilla photographic installations into shuttered public spaces. In the series “Don’t Ignore the Messenger” the group wheat-pasted enlarged prints of letters sent from residents along the Hamtramck/Detroit border in 1980 to the facades of structures along that same geographic seam. The letters all come from the Ken Cockrel Jr. Archive at Wayne State University’s Law Library, and respond in various ways to the announcement of the then new GM Poletown Plant. Despite their status as almost verbatim found objects, they share a quality with Shanna’s more orchestrated studio work- a deep sincerity, and a formal beauty that seems to spring from a bare-bones request for a better tomorrow.