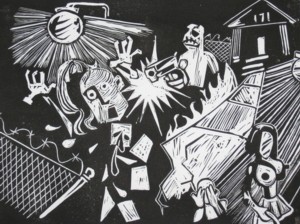 Carl Wilson’s autobiographical print projects are clever, heartfelt, and often filled with self-deprecating humor, but most of all they show an artist with an exceptionally refined capacity to reflect unflinchingly on life, its pleasures and demons. To be sure, Wilson has seen more than his fair share of the latter: raised in humble and difficult circumstances on Detroit’s east side, falling prey early in his life to a manipulative religious organization he calls “the cult,” spending years breaking his health in automotive assembly plants, and then finally, after emerging from all these tribulations into a new phase of his life, suffering cancer and two years of total deafness. All this informs the story of a natural artist who, thanks in part to a timely buyout from Ford Motor Company, but more importantly the loving support of his new wife and emergence from the constraints of a stifling religion, decided late in life to devote himself full-time to his work. It also explains the apparently fearless way in which he opens himself up through his work—for after all these experiences, what more is there to worry about?

For an artist committed to working from a position of total emotional honesty, and without self-imposed boundaries, there is a fitting balance in choosing the medium of linocut, the inherent limitations of which force the artist to focus on the essence of the subject matter. That Wilson had a natural feel for this style of printing was obvious from the start, as an early work, Waiting for My Change to Come (2008), demonstrates. The woman in the print is Wilson’s mother and the context is her being “let go” from a waitress job during the Depression because “good white women” needed the work. The body language speaks of a quiet dignity and Wilson’s belief in his mother’s commitment to “combating ignorance with excellence.”

Wilson’s first complete series of work in this medium was The Parkhurst Papers, based on the varied experience of living in the John R/Parkhurst neighborhood, an area that is home to much crime, especially prostitution, and a small community of artists and pioneering creative types. Wilson’s prints look in a characteristically nonjudgmental way at both sides of the neighborhood. For example, Coco Popped (2012) is about the tragic murder of a transgender prostitute known to Wilson and his wife, and O Pioneers! (2012) is a humorous, but essentially generous, portrait of two prominent new residents. The series formed much of the basis on which Wilson was chosen as a 2013 Kresge Fellow, a significant achievement for a largely self-taught artist.

In the later series Her Purse Smelled Like Juicy Fruit, Wilson created a collection of prints based on the life of his mother, Louise Wilson. The prints (e.g., Boy, You Need Jesus and Goodbye, both 2014) tell the story of a stoic and enigmatic woman working to raise a family with very little money and a husband diagnosed with paranoid schizophrenia. As a group, they tell the more universal story of a mature man looking back with love on his childhood relationship with his mother.

A current project, The Killing Floor, presents a more somber tone, befitting its examination of issues relating to cult-like religions and the destructive influence they exert on their followers. The print Burn (2014), with its naked female figure staring out at the world through the window of a sparse room, addresses Wilson’s reflection on the relationship between the cult’s repression of the sexual imagination of its members and corresponding feelings of low self-worth. In refining this emotionally complex subject into a printable composition, Wilson follows a sequence of experience, reflection, and conceptualization that is very similar to the experiential learning cycle many educationalists recognize as the foundation of deep learning. Ultimately this may be the core of Wilson’s project: first to learn from his own experiences, then to encourage us to learn from ours.