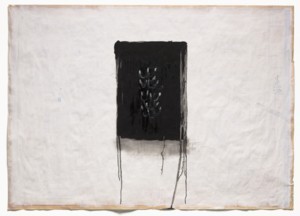 Ed Fraga remembers as a child taking a sheet of cardboard, folding it into a box, and looking at it, being thrilled to realize he’d created a small but powerful object. Later he started to populate the box, with dioramas, stage sets, magic shows for neighborhood kids, and other constructs of his imagination. “In a way,” he says, “I’m still trying to fill the box.”

Mostly Fraga fills the box with material that speaks to the human condition. In a seminal early work, Memory Portrait Book (1982/3), he created over 30 small scale oil pastel portraits of “everyday saints” he encountered while living in Detroit’s Cary Building. The portraits were compiled into an artist’s book covered in asphalt peeled directly from the street. In a later solo show at Detroit’s Feigenson gallery, Fraga presented a series of figurative works (for example 1983’s Geenie’s Weenies), each surrounded by a meticulously detailed box/frame, assembled from, and often containing, found objects. The two series reveal Fraga deeply absorbed with life’s anomalies, but looking at them through a lens that feels closer to Joseph Cornell than Diane Arbus.

Subsequent works, e.g. 1986’s Summer, or 1989’s Sinking Man, show Fraga moving into unequivocally spiritual and psychological terrain. The overall construction of Summer, with its clear references to forms such as the altar and the baptismal font, indicates Fraga’s lifelong dialog with Christianity. Religion is a constant sub-text for Fraga, but he is adamant that his art should be open and free of specific messaging. Works such as Sinking Man hover just on the edge of narrative, inviting viewers to create their own interpretation. This is Fraga’s intention. While he undoubtedly sees the artist as having a responsibility to the viewing public, it is difficult to find the precise metaphor for this relationship. Certainly it is not the preacher and the flock, nor is it the teacher and the class, or the storyteller and the audience. Perhaps at times it is closer to the artist as magician, encouraging the viewer to suspend disbelief, and see more mystery in the world.

Other constants in Fraga’s work are craft and composition. His studies with teachers such as John Hegarty and Louise Nobili provided him with the rigorous education typical of Wayne State’s art program of the late seventies. As he puts it, these aspects of art object-making are now so deeply engrained that he can’t escape them. One of his best known works is La Santa E Gloriosa Carne (1994), a large elegiac painting that was exhibited in the Detroit Institute of Art’s early Medieval gallery during the institute-wide Interventions exhibition (1995), and subsequently purchased and placed on permanent display. Fraga considers it a culmination of his efforts to that date, both in terms of its technical fluency, and the directness with which it addresses his core themes of birth, death, and resurrection.

In the early/mid 2000s, Fraga began to focus his drawings and paintings on themes of childhood memory and innocence. Simultaneously he developed a looser, more intuitive style than the meticulous rendering exemplified by La Santa E Gloriosa Carne. An important literary touchstone was William Blake’s collection of poems “Songs of Innocence.” Shortly afterward he also started an important body of work that was physically based on time logs that his father had kept as part of his electrical contracting business back in the 1970s. Fraga considered his artistic mark-making in this series to be a collaboration with the work of his deceased father. Much of the art from this period, including Book of Time Logs (2008) and Map:Allegory of Childhood (created in 2008 on a bathymetric survey of the Caribbean that Fraga found in his Father’s possessions), was exhibited at the Flint Institute of Arts in 2009.

In recent years, Fraga has continued to draw and paint on ephemeral materials that arrive with their own history. Since 2014 he has been working on Sanctuary, an extended series of paintings, that are presented on blueprints for a non-denominational sanctuary in Ann Arbor drawn by an architect friend. The blueprints are first painted in gesso, which give individual works (e.g Tablet (2015)) a distinctively ethereal quality. Ultimately Fraga sees the completed series as an installation configured for a specific location. His objective is that viewers will experience the work in a transcendent manner. In a sense, the gallery will become another iteration of the box he started to fill as a child – and we will all be able to enter into it.