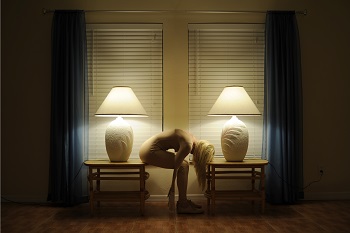 It makes sense that Nicola Kuperus was onstage at the Detroit Institute of Arts recently, running her big yellow vacuum up and down a strip of beige carpet. And that a few minutes later, her face obscured by a long, black wig, she started to play the vacuum, using an effects pedal to modulate and amplify its heavy roar. And that a few minutes after that, she pulled out a tall, pink vase and began to fill it, maniacally, with fake plants, while on a screen above her, another Kuperus appeared, dressed up and gesticulating like a cross between a magician, Laurie Anderson, and some faceless horror movie creep, and that that Kuperus had the same vase, which she began to slap with her white-gloved hand, asking it, over and over again, “Ya like that?”

It makes sense. After all, at the base of The Perfect Accent Piece (2017), a collaborative performance with Adam Lee Miller, lies a grab bag of familiar obsessions and tendencies that Kuperus carries with her from a prolific, 20 year career in art and music—obsessions we’ve seen before, in different forms.

Here, for instance, is her fascination with the faceless, objectified body and its obverse, the curiously humanized object. Headless women proliferated in Kuperus’s most widely known body of work, her “classic car” series of 2000-2010, for which she photographed the bodies of slender, elegantly-dressed women in, on, and around luxurious, behemoth automobiles. A curiously cool, antiseptic answer to pin-up girls and hot rods, this series invites a feminist reading that Kuperus herself deflects—for her, the literal object-ification of these bodies isn’t about some pathological tendency toward de-personhood, but simple form. “I was trying to take the body,” she says, “and make it just as sculptural as the cars.”

And yet, Kuperus’s work is too fetishistic, too psychosexually fraught, to ever just be about form. Here too, after all, is her almost alien hyper-awareness of the weirdness and pathology embedded in everyday life—or, to put it another way, of the ubiquity and banality of perversion. As the frontperson of ADULT., the electro band she formed with Miller in the late 1990s, Kuperus became known for her monotone delivery of lyrics like, “Do you like my handbag? It’s filled with lots of money. / I want to spend my money on entertainment.” To listen to ADULT. records, especially the early ones, is to encounter Kuperus as android: almost human yet insistently other, observing and reminding us how profoundly strange our desires and habits are, how untidy our emotions.

The Perfect Accent Piece elaborates on these established themes (and sundry others), but it also represents a notable emergent tendency in Kuperus’s practice: the use of the artist’s own body. In a variety of recent photographs, videos, and performances, Kuperus has started to literally embody her ideas in time and space, a shift that has opened up compelling new opportunities for the evolution of her creative vision.

Consider one of the first series for which she served as both photographer and subject,  “Attempting Camouflage” (2014), in which Kuperus, wearing a blonde wig and costumed to mimic her domestic surroundings, is nevertheless an insistent object that does a terrible job blending in. The effect can be at once beautiful, funny, disquieting, and a little heartbreaking, as in Evening Fragments (2014), where her body rests, awkwardly and unmistakably, between two end tables.

Hitting the Wall (2015) is a three-channel video in which the artist—again bewigged in blonde but this time wearing a black trench coat and black gloves—is seen from behind as she repeatedly falls or flings her body against a wall. The images evoke a disturbing scenario of futility or heedless self-harm, but through careful looping and editing, the dull thuds made by her triplicated body as it collides with the wall become something else: a sharp, shifting, engagingly rhythmic composition.

For Kuperus, whose photographs and videos are meticulously composed, chance and unpredictability are key forces that drive her, increasingly, toward performance. Toward embodiment. In her vigorous embrace of this new pursuit, which she describes as both “liberating” and “kind of terrifying,” she has begun to shatter her immaculate surfaces, revealing the depths—vivid, riotous, uncomfortable and absurd—that have long churned beneath them.